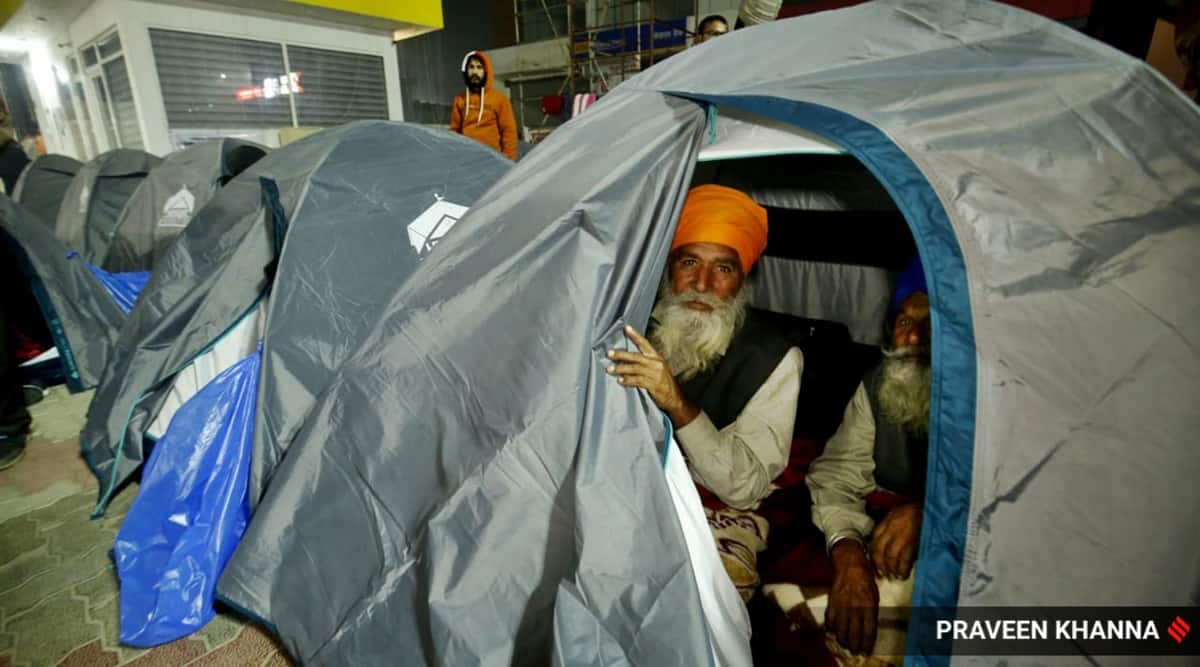 Around 400 pizzas were distributed within minute. (Express photo by Parveen Khanna/ Representational)

A group of five friends set out from Amritsar on a cold Saturday morning. They didn’t have much time to organise a regular langar, so they collected ‘regular-sized’ pizzas from a Haryana mall and set up a stall at the Singhu border.

Around 400 pizzas were distributed within minutes as a huge crowd, including the protesting peasants and residents from nearby areas, queued up.

The ‘pizza langar’ has since hogged headlines and garnered compliments from different quarters, and also brickbats from a certain section.
“The farmers who gave the dough for pizzas can also afford to have one themselves,” says Shanbir Singh Sandhu, who organised the ‘pizza langar’ with his four friends for the peasants protesting at the Delhi-Haryana border against the contentious agri-marketing laws.

“We didn’t have much time to organise a regular lentils-chapatti langar…. So we came up with this idea,” says Sandhu, who is himself a farmer and an economics student at Guru Nanak Dev University in Amritsar.From chapatis to pizzas | Langar menu expands in Sultanpur Lodhi

The farmers have been protesting at several border points into Delhi for over two weeks over their demands to repeal the new legislation, which they claim would benefit the corporates, and end the traditional wholesale markets and the minimum support price regime.

Sandhu’s friend, Shahnaz Gill, underscored that people get bored eating the same thing every day. “We thought we should bring them (farmers) something else to keep their spirits up,” he said.

The 21-year-old student of agriculture says this is the first time they have organised a ‘pizza langar’, expressing happiness that people have appreciated their efforts.

However, Sandhu says it is unfortunate and totally unacceptable that some people were ridiculing farmers having pizzas.

“Few people just cannot digest that a farmer can have a car, wear good clothes and have a pizza. The farmer has moved on from dhoti-kurta to jeans and T-shirt,” the 25-year-old student says. “It’s about time these people grew up.”

One of the reasons for organising a ‘pizza langar’ was to change the public perception about farmers, he adds.Farmers’ concern |’Will lose land to corporates because of the new laws’

Gill says no one has the right to comment on what a farmer should eat or wear.

“People have been calling us ‘so-called farmers’. Before making any such comment, they should come and meet us first, he says. “They will get to know that our thinking is much better than theirs.”

The five friends have decided to organise another such langar, which they say will be better and bigger.

It can be pizza or burger or something else, too, Sandhu says.

Big news for HDFC Bank customers! Terms and conditions issued for loan recycling, these documents will be required